The first contract signed by football legend Sir Stanley Matthews has sold at auction for more than £4,000. 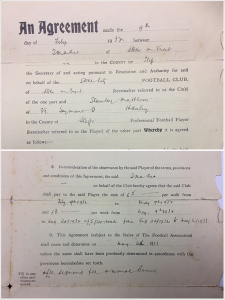 Mr Hanson said this also greatly exceeded its estimated price of £600 to £800.

The second contract showed Sir Stanley's wages at Stoke had risen to £7 a week by the latter part of 1935 and £8 if he made it into the first team.

This was sold to a bidder at the auction in Etwall, Derbyshire, whose father was a "life-long Stoke fan", Mr Hanson said.

The first contract was sold to an online bidder for £4,100.

"There were five people on the phones, people online as well as others bidding in the room," Mr Hanson said.

Both contracts were sold by three Stoke brothers who found the items "gathering dust in a drawer for nearly 50 years".